Throwing a zero-waste party is hard. And to sum it up, I failed. Miserably. But I’m here to share with you what I learned and where we can improve for the future.

Last Sunday we celebrated my daughter’s first birthday; my goal was to make it as eco-friendly and wasteless as possible. I figured it wouldn’t be that hard. But when you’re a chronic procrastinator it is very difficult to come up with everything you need in the span of 48 hours.

Okay, I exaggerate. It was more like a week. I had a week of proper party planning. (48 hours just sounds more dramatic.)

Let’s split this into three categories to make it a bit more cohesive: decorations, food and gifts. 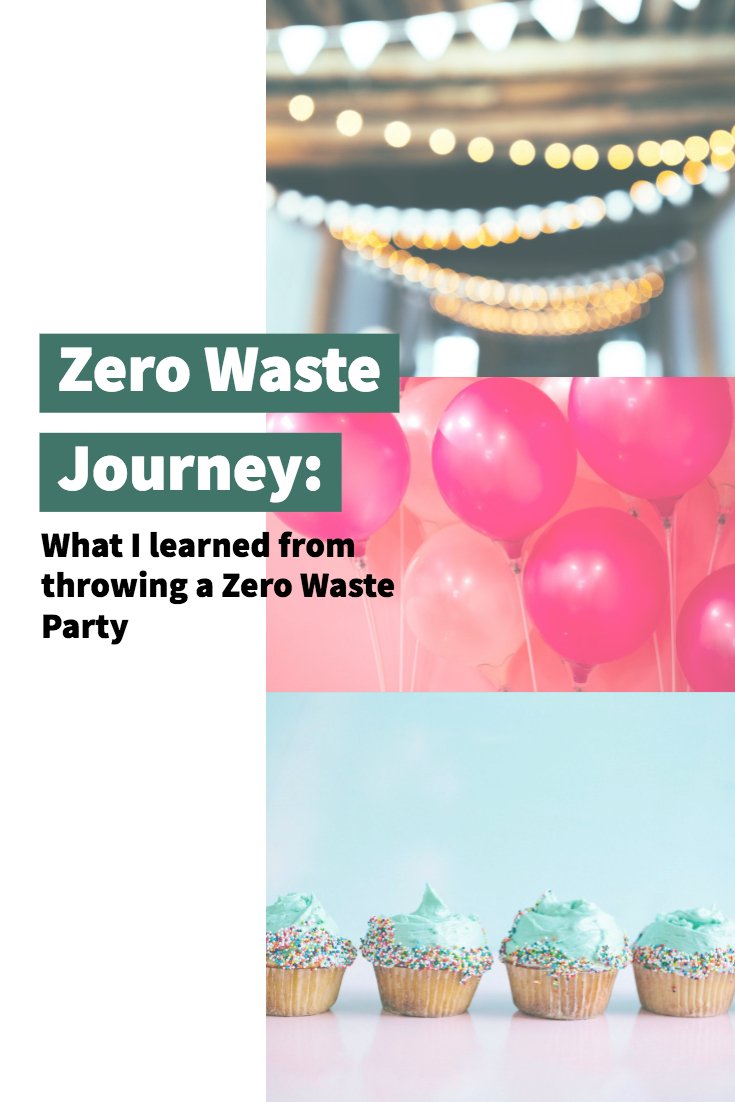 To be honest, I didn’t decorate much at all. In advance I made a “Happy Birthday” sign from cardstock and twine that I had laying around my house. Other than that I didn’t do much of anything.

The plan was to have some seasonal flowers (like poinsettias.) But I couldn’t find any that weren’t in a black plastic pot. If you have read my post on How to Recycle, you will know that where I live, black plastic is not recyclable so it was non-negotiable for me.

I do have a tablecloth which I was able to bring from home to dress it up a little bit. Other than that it was very sparsely decorated and really not festive at all.

In all honesty, I don’t think the decorations really mattered that much.

The room we rented (at our local wellness centre) features a beautiful fireplace in the centre, which I feel was enough to give it a cozy vibe. Plus it was a one year old’s birthday and really what more do you need than food?

Speaking of food, let’s discuss the food itself and then the cutlery.

So food turned out to be one of the easier things. For our veggie platter I bought celery, carrots, tomatoes and broccoli and chopped them up myself. Unfortunately I failed on the dips and didn’t make them like I was planning to. (Let’s just say the morning was a bit more hectic than we had planned and began with a child/crib covered in vomit.) So I bought pre-made Hummus and Ranch dipping sauces.

We had a bit of a cheese platter. I bought the cheeses and cut them up, but yes they did come wrapped in plastic. I don’t think there’s anywhere I can buy bulk cheese around here.

The cupcakes and smash cake were made by my spouse’s stepmother (and they were beautiful!) Not entirely zero-waste but gorgeous nonetheless.

We also served pizza－where I live the pizza boxes are compostable, so at least we didn’t create too much added waste with those either.

At the party we served coffee, tea, a mini hot chocolate bar, water and to my spouse’s request, pop. As the soda was a last minute addition to the party plans I picked up 2 litre plastic bottles rather than aluminum cans. For future reference I would use canned pop instead. Aluminum is endlessly recyclable whereas plastic is not.

I tried my darn hardest to find enough reusable plastic cups, I really did. But it seems like people hold onto Tupperware cups like their lives depend on it and I didn’t want to fork over the money for new Tupperware. Instead, I bought plastic cups to serve the water and pop in. In this case plastic is a more eco-friendly option than paper because paper cups come with a wax lining that is exceptionally hard to recycle. At least these plastic cups are able to be made into something else.

Instead of plates I had only cocktail napkins, which, in hindsight wasn’t the best for serving pizza and veggies on. Depending on the age group I recommend having reusable glassware or at the very least plastic plates that you wash and reuse.

I bought enough mugs for the coffee, tea and hot chocolate so that wasn’t an issue. We brought them home and placed them in the dishwasher to be cleaned.

Check out my Black Friday Vlog to see some of the things I picked up for the party:

The venue that we were at did not have bins for recycling and compost, even though these things are readily available in our community. So I brought my own recycling and compost bin from home. This helped to minimize at least some of the food and plastic waste that was mentioned above.

I did ask that instead of receiving cards, people bring books for my daughter. I didn’t want any toys. However, Madison did receive a few toys that were wrapped in wrapping paper which, unfortunately ended up in the garbage.

Overall, I think that planning a completely zero-waste party is exceptionally hard when you’re trying to satisfy certain norms; such as a gifts and the decorations. Being zero-waste basically means breaking the convention that everyone is used to and it makes most people very uncomfortable. It’s intriguing, really.

With time I think that this will become easier. This was my first attempt at a zero-waste party and although I failed in some aspects, there’s always room to improve.

Do you enjoy party planning?