When I was a teenager, Garnier Fructis was one of my favourite brands. Their marketing makes it seem like Garnier is a more natural and environmentally-friendly choice.

Fast forward ten years since I stopped using Garnier products. They have released a new line: Garnier Whole Blends. It’s touted as “paraben-free” haircare and boasts imagery of natural ingredients. So, are they as natural and sustainable as they appear… or is Garnier Whole Blends greenwashing their consumers?

On the Garnier website, they make four gigantic claims: They are “nourishing and gentle”, paraben-free, solidarity sourced and packaged in bottles that are 30% post-consumer materials.

A bit about Garnier’s parent company

To begin, it is important to know that Garnier is owned by L’Oreal. Within their corporate progress report, they state that Garnier has switched to using recycled plastic within their packaging and has partnered with UNICEF to support various humanitarian efforts. As a whole, L’Oreal has focused on reducing the environmental footprint of their formulas.

Along with making the switch to packaging that contains 30% recycled plastic they’ve also partnered with Terracycle to ensure a closed-loop programme. This is a step in the right direction and I applaud Garnier’s efforts to reduce waste. Though, it doesn’t mean that Garnier is not greenwashing its customers. 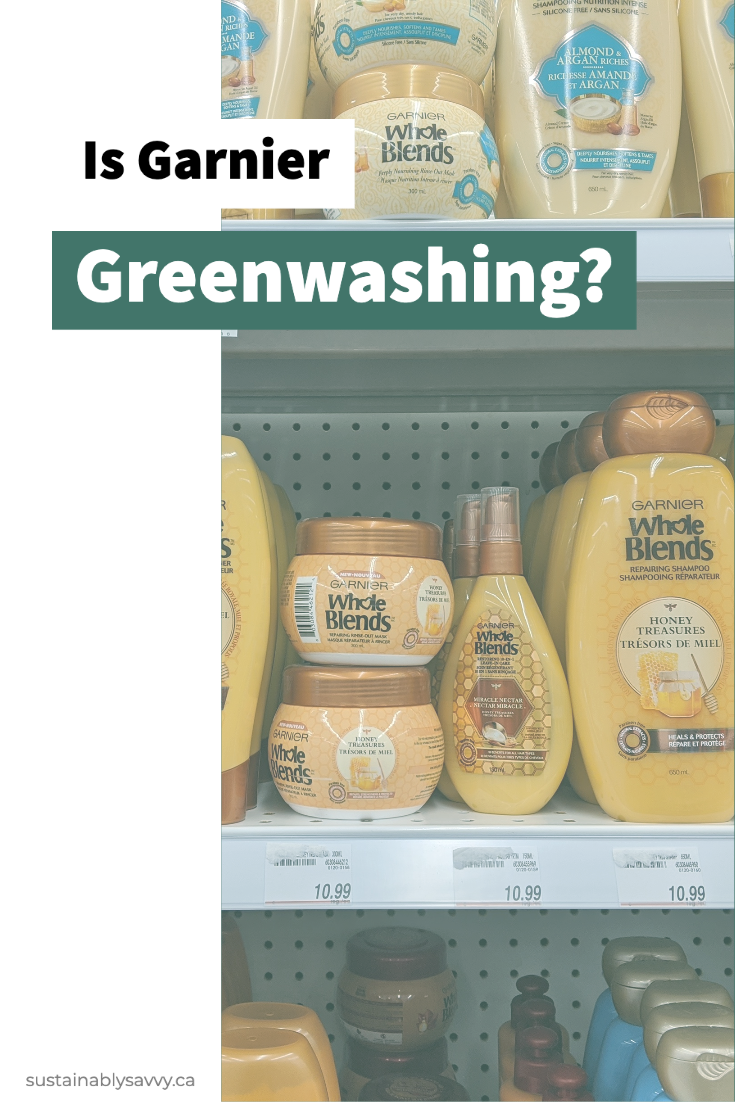 L’Oreal has created their own certification, Solidarity Sourced, to promote ethical and sustainable sourcing of their ingredients. It is a scoring system based on five key pillars including: quality, corporate responsibility, innovation, supply chain and service, and competitiveness according to the L’Oreal progress report.

The corporate responsibility of the ingredient is weighted at 20% of the overall score. Overall, the end product needs to be high-quality at a fair price without taking advantage of the environment or workers.

Parabens are a man-made ingredient. Parabens are stored in fatty tissues on the human body. And some studies have shown that in large quantities they can to lead to cancer.

However, in the Argan & Almond Riches Shampoo there are a couple of questionable ingredients that still remain. Based on the ingredient list from the Garnier website:

You may enjoy: Free From Chemicals & What They Mean

This is what we would call a first party certification. It is a claim made by Garnier with no supporting documentation and used for marketing purposes alone.

So is Garnier Whole Blends Greenwashing?

I believe there are certainly more sustainable and environmentally-friendly alternatives to haircare products. Including shampoo and conditioner bars. But all things considered, for a large corporation I would say that L’Oreal and Garnier are making good strides toward sustainability.