So tanning and I don’t really get along – maybe it’s the fact that I have fair skin and lots of freckles. But anymore time than twenty minutes in the sunshine and I’m definitely going to be coming inside with a sunburn. I’ve tried traditional self tanners like the L’Oreal Paris Sublime and ironically enough ended up having a terrible allergic reaction to it. In an effort to not look as pale I wanted to try my hand at a natural self-tanner. And pray for the best, basically.

Chocolate Sun Cocoa Glow is the second level offered out of three different choices of lightness. Cocoa Lite being the first and lightest option and Absolute Sun being the darkest option. I received a small sample of the Cocoa Lite when I made an order on Clementine Fields and decided that although it did work, I wanted something with a little bit more punch.

Chocolate Sun Cocoa Glow is a natural self-tanner crafted with ingredients that are known to be nourishing and hydrating for the skin with Shea Butter and Coconut Oil within the ingredient list. It’s listed as leaving fair skin tones with a golden brown glow; and develops in about 6-8 hours after application. 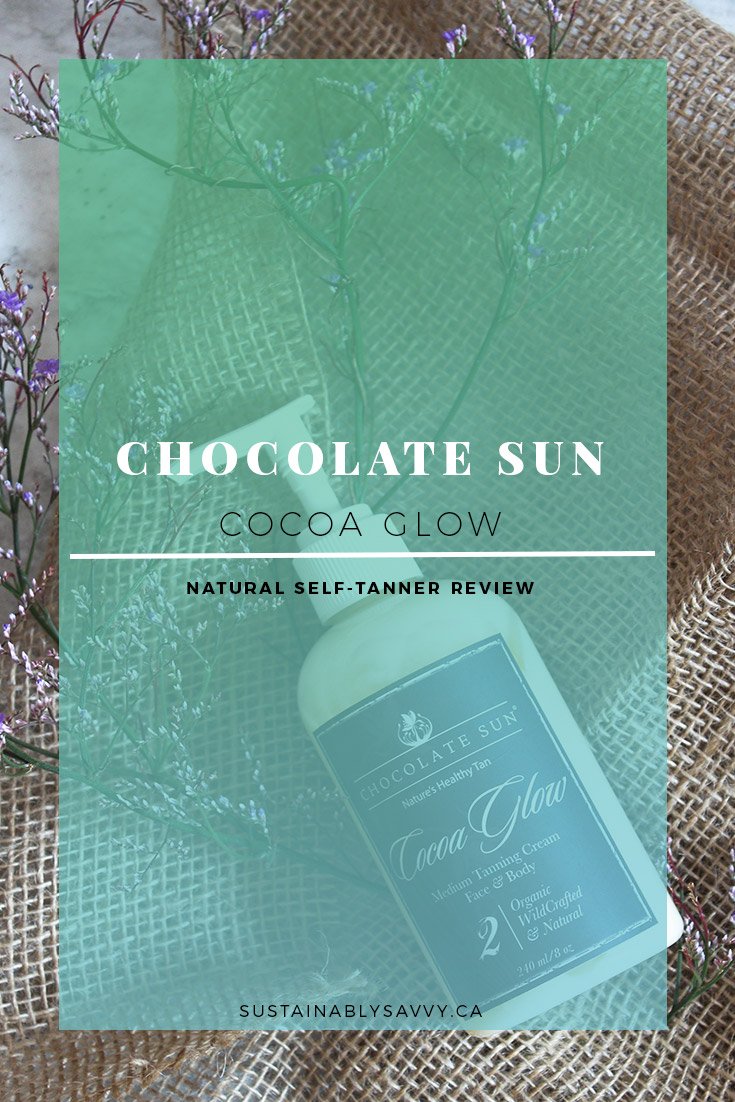 How does the Chocolate Sun Cocoa Glow Natural Self-Tanner work?

First and foremost, this sunless tanner did not make me break out in hives when used anywhere lower than my neck. I did apply the self-tanner on my neck and noticed that I had started to get a burning sensation, so I quickly washed it off. I presume my face and neck are much more sensitive to one or more of the ingredients. Luckily powder bronzer exists and that works to blend my face and neck with my décolletage.

I bought this product before I found out that I was pregnant and since my pregnancy I have used it sparingly (not on my belly – just in case!)

As DHA in any form, synthetically or naturally-derived has been shown to alter DNA and could be carcinogenic. The FDA has warned against spray tans (or any aerosol sunless tanner) due to inhalation concerns. It has not been shown that DHA when applied topically has the same effect as when it is inhaled, but it could still be potentially harmful.

I still have quite a lot of the bottle left and I’m hoping that it will last long enough to use next year and after my pregnancy for special occasions. It does have an expiry date due to the nature of the natural ingredients.

After application I was lucky to get about three days of glow. So you do have to reapply it quite frequently and the scent isn’t anything too amazing. To be honest, I don’t think any self tanner really smells good. This isn’t the worst of the bunch that I’ve had the opportunity to sniff, but it’s also not the best. I would describe it as a weird chocolate-cardboard smell. (I do prefer it over the L’oreal Paris Sublime Self-tanner scent though!)

It didn’t appear patchy either. When you apply it, it is recommended to rub it in a circular motion. For your hands and feet they suggest using a damp cloth to help apply it to avoid any weird orange spots. I did notice after the first time I applied it my ankle did get one of those really nice deep orange spots that are a dead giveaway you used self-tanner (but I had ignored the instructions so it’s really my fault…)

The thicker you apply it, the more pronounced the glow

The first time I applied it, it was pretty sparingly. I was afraid to get a really deep orange Jersey Shore tan – but I had applied so little that my skin only went about half a shade darker than normal. You also don’t have to rub it all in until you can’t see it. When you leave the residue to soak in naturally it allows the tan to become even darker.

But that being said, it doesn’t feel sticky…

It feels like any other body lotion that you would apply after a shower – it soaks in relatively quickly and your skin feels moisturized. I would apply this in place of my usual body lotion after getting out of the shower and allow it to develop overnight. 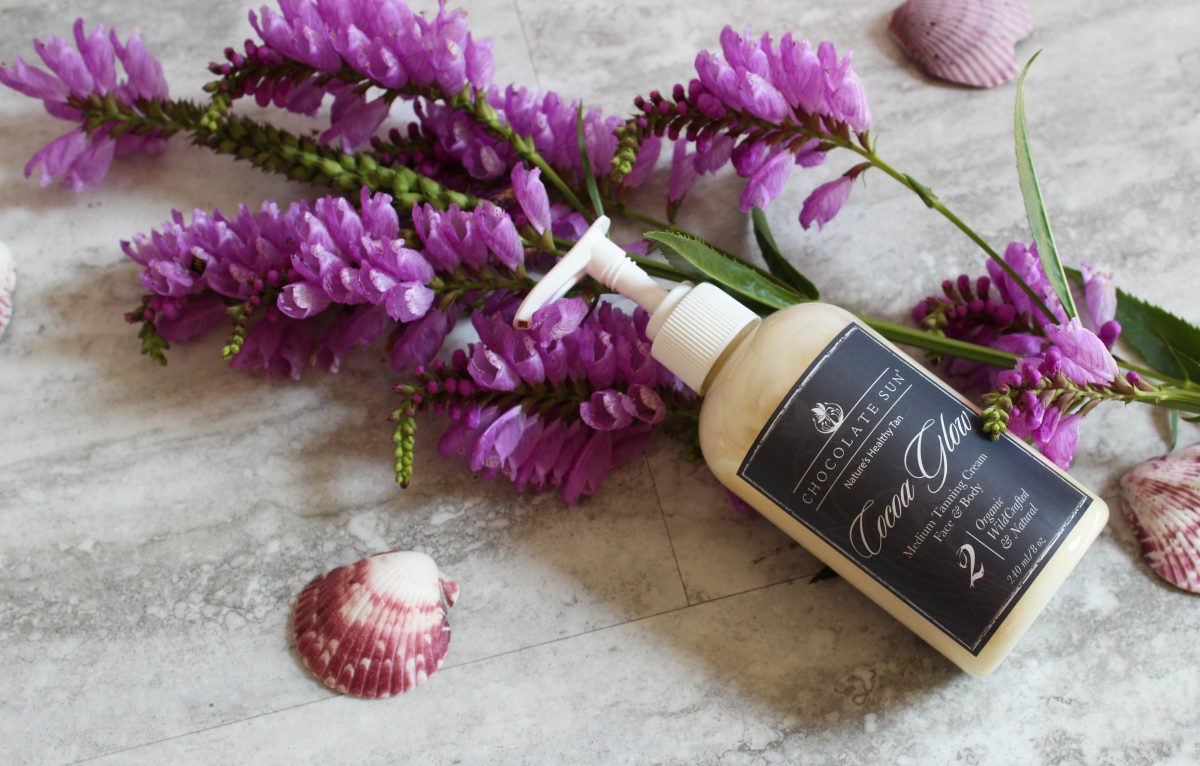 So what’s in the Chocolate Sun Cocoa Glow Natural Self-tanner to make it work…?

The ingredient list is pretty short considering it is a self-tanner – in comparison with self-tanners that you would purchase at the drugstore or even Sephora. It includes a lot of really moisturizing ingredients which is why it’s such a hydrating lotion. However, there are a few ingredients on the list that I couldn’t find too much information about.

Ingredient to use with Caution

pH-balanced Distilled Water (Aqua)
ECOCERT DHA Derived from Sugar Beets (Dihydroxyacetone.) DHA is a sugar that interacts with Amino Acids in the top layer of your skin to create the glow. It is potentially harmful when inhaled or ingested.
Sunflower Seed Oil (Helianthus Annuus.)🌱 Used for skin-conditioning.
Sweet Almond Oil (Prunus Dulcis)🌱 Is used as a fragrance and skin-conditioning ingredient.
Aloe Vera Gel (Aloe Barbadensis)🌱 Used as a moisturizing ingredient, it also has anti-inflammatory properties.
Coconut Oil (Cocos Nucifera)🌱 is used for moisturizing, can be comedogenic.
Jojoba Oil (Simmondsia Chinensis) is an emollient and skin-conditioning ingredient.
ECOCERT Cetearyl Olivate (Derived from Olives) is an emulsifying agent that also has moisturizing properties.
ECOCERT Sorbitan Olivate (Derived from Olives) is used as an emulsifying agent.
Shea Butter (Butyrospermum Parkii)🌱 is used for moisturizing.
ECOCERT Green Tea Leaf Extract (Camellia Sinensis) Used as an antioxidant and anti-inflammatory, Green tea also helps to minimize the effects of aging and wrinkling skin.
ECOCERT Leucidal Liquid (Natural Preservative Derived from Radish)
Potassium Sorbate (Natural Preservative Derived from Fruit) It could be a skin irritant.
ECOCERT Sodium PCS (Amino Acid) No information regarding this ingredient.
Cocoa Absolute (Theobromo Cacao)🌱 Is used as a fragrance ingredient and a skin-conditioning agent. It has skin protecting properties.
Vanilla Extract (Vanilla Panifolia) is used for fragrance.

92% Organic Ingredients.
Water not included in calculations.
All Chocolate Sun organic ingredients come from certified growers. All additional ingredients are either ECO-Certified, wildcrafted and or 100% natural. All formulas use vegan friendly ingredients. Tested only on humans.

I am impressed with this self-tanner considering the only slightly problematic ingredient is DHA (but you can’t find a real self-tanner without DHA that does more than just paint the skin.) At a $48.00 price tag it’s certainly not the most economical option. You are basically paying $6.00 per 1 oz of product.

I can see it being a good investment for people who will be using this on special occasions and regular self-tan users because it’s definitely not as bad for your body as other products on the market. If you were using one bottle a month then this is certainly a very expensive habit to have, but if you’re able to stretch the product out over the course of a summer I think it’s well worth it.

Alternatively, we could just accept our paleness and move on with life… But that would be way too easy, wouldn’t it? 😉